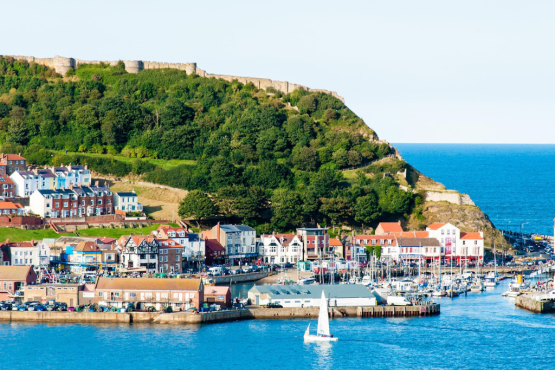 With summer now finally here, I thought I would do a little research and see what seaside towns our most accessible from East London.

Although pretty much anything can be found in London, coastal towns aren’t one of them. Luckily, with the coasts of Kent, Essex, and Sussex reachable from East London in under two hours, a weekend escape to coastal dreamlands awaits you at any of these gorgeous seaside spots.

It’s time to get out and visit the seaside!

My top pick of seaside towns in Kent

Quirky and charismatic, Deal boasts an award-winning high street of independent shops, a pebbly beach dotted with fishing boats and beach huts, and an unspoiled seafront graced by bespoke bistros and historical buildings. It is also frequently highlighted as one of Britain's best places to live.

Deal has waterfront restaurants with mouth-watering menus, and cosy, chic eateries tucked away in the characterful town centre. Perfect!

Even if the tide is in, there is still plenty of beach to make sandcastles! Restaurants, bars and seafood stalls are just a short walk away in the Old Town. Dreamland Amusement Park echoes with the sounds of delight as visitors, young and old, enjoy this great British seaside experience.

If you haven’t yet visited Broadstairs, you don’t know what you’re missing.

If you like food, you’ll love Broadstairs. Eateries include smart restaurants, quaint cafés and 1950s ice cream parlours. Visit in the autumn and feast at the three-day Broadstairs Food Festival! 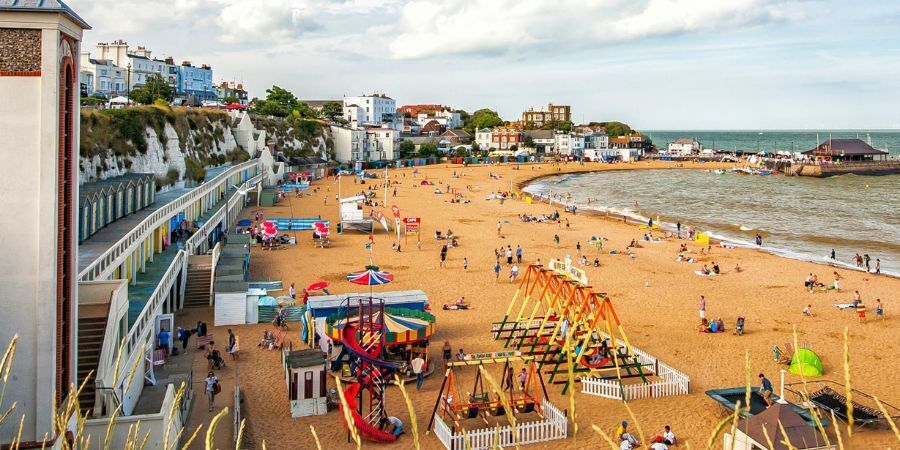 My top pick of seaside towns in Sussex

The pier once attracted the likes of The Rolling Stones and Jimi Hendrix, before a devastating fire destroyed the original structure, but its current, more minimalist incarnation recently won the RIBA Stirling Prize and is well worth a visit. Candy-hued fisherman's huts sell ice cream, and in the summer, live music and open air film screenings draw in the crowds.

Although not really a seaside town, Rye is absolutely worth visiting!

Once upon a time, there was a port town called Rye, bristling with ships and smugglers, but then the estuary gradually silted up, and now the hilltop town is two miles from the coast.

That said, Rye still has that seaside ambience though, what with all the screeching gulls, canon positioned menacingly in front of the Ypres Tower, and pubs dripping with tales of looted rum, cotton and the like. It's a breezy one hour 10 minute train trip from St Pancras (with one change), and therefore a good shout for a day trip.

Brighton is one of the UK’s most popular destinations and is less than an hour from London by train. Whilst it has long been known as a seaside resort, there is far more to Brighton than just fish and chips on the beach!

Brighton Pier is the last of three piers that once served Brighton. It sees millions of visitors a year and is a throwback to the days of the Great British Coastal Resort town. It has appeared in several major British works, including Quadrophenia by the Who. For a day trip, Brighton’s Pier, shops and restaurants will easily keep you entertained. If you are thinking of making a weekend of it, then there is plenty of pubs, bars and clubs to keep you smiling until the early hours. 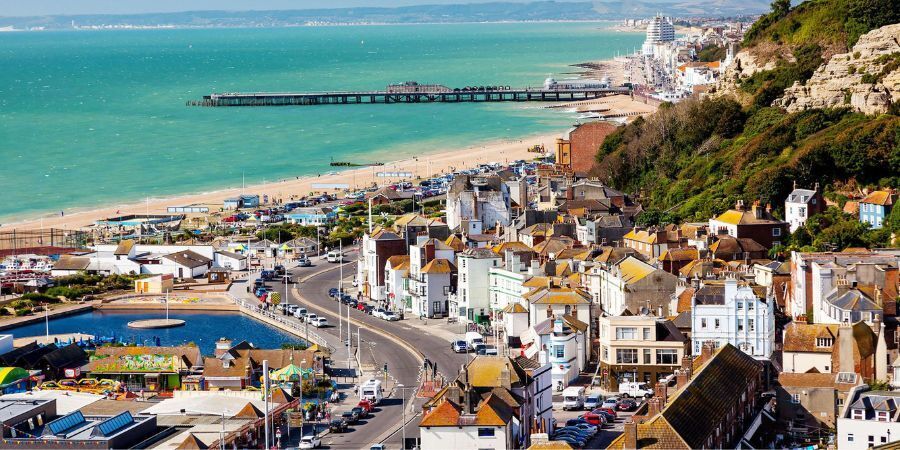 My top pick of seaside towns in Essex

Clacton's main attraction is its pier, affectionately given the address One North Sea, and the amusements which surround it. Head down the slope from the town centre, under the charming if Venetian bridge and into the twin towers marking the pier's entrance.

Inside, slots ring out, fruit machines sing, and neon lights vie for your attention. There's even a Seaquarium for those who want to see marine life without getting wet.

Clacton is blessed with beautiful sand and plenty of it. On a warm day, the area around the pier gets predictably packed, but things quieten out as you head south-west, towards the Martello tower. Even if you're not looking for a spot to plonk your towel, it's worth taking the walk along the promenade!

“With summer just around the corner and a whole load of great events going on, it couldn’t be a better time to visit Southend” quoted from their own website, and fair play to them, they know what we want!

They literally have tons happening all over the summer. Check out their page here and see what tickles your fancy - https://www.visitsouthend.co.uk/

The perfect seaside getaway from London!

Mersea Island is the ideal spot to get tons of sea air, delicious seafood, wonderful beachside places to stay and oodles of strolling space. An epic to get away from it all.

Just a few hours’ drive away, you can be relaxing on the beautiful sandy shores of Essex in no time from the capital, eating delicious fresh seafood and raising a glass in your beachside accommodation to a setting sun over a sandy shore.

So there’s no question that a lot of the top things to do in Mersea include relaxing and hanging out at the beach! But there’s also more than enough to do elsewhere on the island too. From watersports and boating to golfing and eating, there’s plenty of treats on offer.