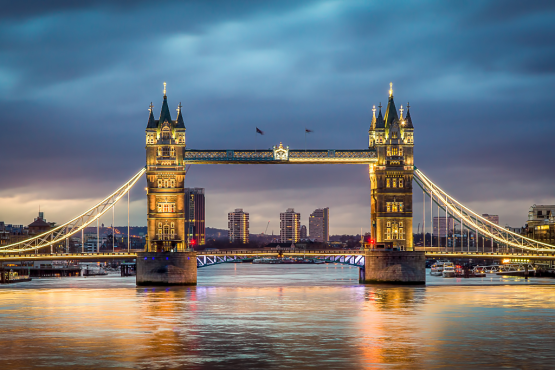 London has some of the best architecture in the world, with its skyline filled with beautiful and elegant buildings dating back hundreds of years and many more built in recent times. Here’s our list of ten architectural gems you can’t miss while visiting London.

This Grade I listed building is one of London’s most iconic structures. Completed in 1894, it was designed by Sir Horace Jones and John Wolfe-Barry as a bascule bridge, which means that its central section can be raised to allow ships to pass through (although today it is only opened on special occasions). Tower Bridge has become a symbol of both London and England. It also appears on countless postcards, stamps and souvenirs.

2) Houses of Parliament at night

One of London’s most famous and iconic buildings, Westminster Abbey is an unmissable architectural gem. With a mixture of gothic, neo-gothic and baroque architecture, it’s a truly magnificent sight to behold. Completed in 1840, it was designed by Charles Barry who also oversaw construction of Buckingham Palace. It has been at its current location since 1065 making it one of London’s oldest buildings. The building itself is home to numerous tombs, including those of Sir Isaac Newton, Charles Darwin and Geoffrey Chaucer. A must see for any visitor to London!

As one of London’s most iconic landmarks, St Paul’s Cathedral is a masterpiece of architecture. It was designed by Christopher Wren and built between 1675 and 1710. Despite suffering damage in The Blitz during World War II, it has survived to become one of England’s best-loved tourist attractions. From inside, you can enjoy impressive views across London; from outside, it remains a symbol of hope and strength for all who see it.

The Gherkin, more formally known as 30 St Mary Axe, is a skyscraper in London’s main financial district. It was designed by architect Norman Foster and completed in 2004. The name of its long, thin shape alludes to the pickled cucumber—or gherkin—used as a relish on British food platters. This distinctive skyscraper is often featured on postcards and in city skylines; it's considered one of London's most iconic buildings today. Although it looks like a giant glass-and-steel pickle, locals have affectionately nicknamed it the Swiss Re Tower because of its resemblance to Switzerland's national flag. In addition to being an architectural gem, 30 St Mary Axe is also an eco-friendly building: Its lights are motion activated and can be adjusted according to sunlight levels, and its heating system works with heat from visitors' bodies instead of radiators or boilers.

Situated on Lime Street, London, Lloyd’s Building was built in 1986. It was designed by architect Richard Rogers, who famously took the guts out of the building, the stairs, services and toilet blocks, and placed these around the edges of a rectangular block. Then he gave it a central atrium with grand, theatrical escalators linking the floors. It is a simple and thoroughly detailed building that respects its urban setting while challenging almost every preconception we might hold about buildings for seventeenth-century financial institutions.

Built in 1703 as Buckingham House for John Sheffield, 1st Duke of Buckingham and Normanby, it was enlarged and transformed into Buckingham Palace in 1837. From 1851-1855 it became home to Queen Victoria, her husband, Prince Albert and their nine children. It has been a royal residence ever since. The palace is open all year round from 9am until 6pm every day except 25 December and 1 January (when it closes at 3pm). It is closed on Tuesdays (except Bank Holidays) from October to March but stays open throughout August. There are two ticket options: an audio tour or a guided tour, both of which last about 45 minutes.

The Royal Albert Hall is a concert hall on a grand scale and has also been used as a sports venue, a market and even an art gallery. It is considered to be one of London’s most popular attractions. This beautiful building was opened in 1871 by Queen Victoria and Prince Albert who were both huge supporters of music. Since then, it has hosted many concerts, including performances from some of history’s greatest musicians such as Elton John, Frank Sinatra and Michael Jackson. The design was inspired by Italian Renaissance architecture, which can be seen in its domed roof and large arched windows. Today it is still very much loved by locals who enjoy attending shows there regularly.

As if Britain needed another reason to boast about its world-class art galleries, Tate Modern was opened in 2000 and proved that it was possible to be a successful modern art gallery and one of the most popular attractions in town. In 2005 its visitors topped five million people per year; more than those visiting The British Museum. Located on the South Bank of Thames and facing St Paul's Cathedral, Tate Modern attracts millions of visitors each year from all over Europe, making it one of London's most popular architectural buildings.